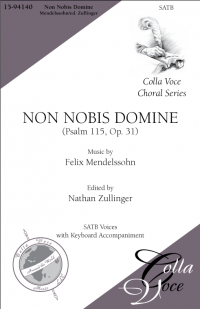 Felix Mendelssohn (1809-1847) began composing his setting of Psalm 115 (Opus 31) in 1829, completing it the following year. The concept and many traits of the work, including the use of Latin, was  influenced by Handel’s Dixit Dominus. This choral excerpt is drawn from the last of four movements. It was originally published in 1835 with the Vulgate text; an alternate German translation by Mendelssohn was included, in hope of endearing the work to the public. The full work is scored for soloists, chorus, and orchestra. It was the first in a series of multi-movement Psalm settings (others include Psalms 42, 95, 98, 114) that Mendelssohn composed early in his career.  This new edition endeavors to proved a revised English text that, so nearly as possible, matches the syllabification and color of the original Latin text.  The simplified keyboard part reduces the awkwardness of previous reductions.

(This audio sample, a MIDI realization, is available for download upon request.)