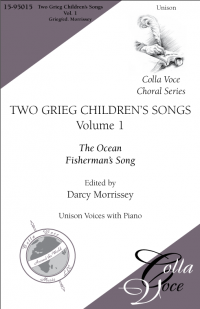 Considered the greatest collection of children’s songs written by a 19th century master composer, these songs are beloved and sung to this day by Norwegian school children and choral ensembles alike. Best known for his Piano Concerto in A Minor, Peer Gynt suites, and Lyric Pieces for piano, Grieg was breaking new ground when, in the summer of 1894, he responded to the request of a friend to compose music for school children. Upon reading poems from a popular school book compiled by Nordahl Rolfsen, Grieg wrote, “The childlike voices awakened such a rich echo in my soul that I developed a desire to live in this world for awhile. Before I knew what was happening eight songs had seen the light of day.” The original eight songs were ultimately reduced to seven, all of which encompass subject matter well-known to Norwegian children in the 1800s: farm animals, Christmas, fishing, the sea, the mountains, and a nationalistic song of Norway. The musical settings of these texts are quintessentially Grieg, employing his distinctive idioms of programmatic motives, rhythmic vitality, and the catchy, singable melodies rooted in the Norwegian folk song tradition.