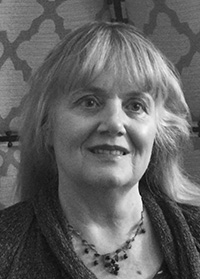 Valerie's work with children's choirs, church and synagogue musicians, and most recently an ensemble of professional musicians who played on the streets during the pandemic provided her a rich context for her love of composition. Over one hundred of her choral compositions and arrangements have been published and are performed around the world. Each piece was tailor made for the available musicians and specific occasions. She is especially committed to mentoring young musicians.

A native of Seattle, WA, Valerie had the privilege and good fortune of studying organ with Dr. Edward A. Hansen and violin with Kristine Smedvig. Robert Bune, her high school music teacher, encouraged her to compose piano parts and instrumental descants for the Ballard Chorale.

While completing her Master of Music degree from Northwestern University, Valerie became increasingly interested in and skilled in the art of improvisation, largely because of the influence of Karl Paukert.

She went on to serve as Director of Music at St. Luke's Lutheran Church in Park Ridge, Illinois, for twelve years. Here she developed a large music program involving over a hundred and fifty participants in choirs, handbell choirs and chamber music groups.

Upon her return to Seattle, she served for twelve years as director of a division of the Northwest Girlchoir. She became organist and developed a vibrant Youth Choir at Phinney Ridge Lutheran Church, where she served for thirty-two years. She recently completed a twenty year tenure as Music Director/Composer in Residence of Temple De Hirsch Sinai.

During the time of pandemic, Valerie co-founded, directed and composed music for a group of professional musicians called the "Alley Band". They played a twenty concert series in the streets of Seattle. This "Alley Band" kept musicians playing when their concert halls had closed and their enthusiastic audience of friends and neighbors was most appreciative.