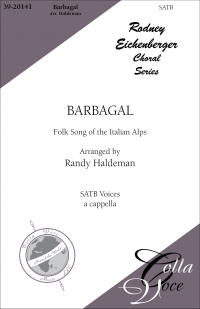 Folk Song of the Italian Alps

In the embrace of the Alps nestles the magical Italian province of Piemonte, literally the “foot of the mountains”. In this land, abandoned castles and monasteries compete for the skyline with craggy peaks and swirling mists, rivers plunge down through forgotten valleys as they swirl past isolated perched villages on their way to the expansive plains of the Po river. There are literally hundreds of these rugged little valleys that probe deep into the cracks of the mountains, and each one has an identifiably unique culture, language, foods, music and folklore. Barbagal was first heard at a cinghiale festival in the shadow of Sacra di San Michele, a fortress-like monastic edifice built in the 9th century, and still active today.

On one hand, Barbagal is a cautionary tale in that it mocks the excesses of the village poltroon, but it also has a second point hidden among the lighted-hearted nonsense syllables: that it is a quick drop to the bottom for anyone, so be kind and patient with each other. This point is made rather enigmatically in the common saying that is incorporated in the last stanza, “When Monviso [Mount Viso] wears a hat of clouds [that is, every day and always], it can be either good weather or bad weather [who can tell what the future brings?]”. It is a sort of Piemontese version of John Bradford’s quote, “There, but for the grace of God, goes I”. In these remote villages, everyone has a responsibility to take care each other, or the entire village suffers.

A rhythmic pronunciation of the Piemontese dialect is available, although the vast majority of the text is nonsense syllables, occasionally punctuated by “Paura Mi!” (literally, “Poor Me!”, but more akin to Alas! or Oi Vey!). Translations are included directly above the choral parts