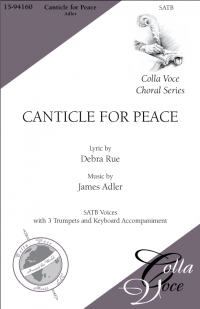 The text for “Canticle for Peace” was written as a reflection of the world religions.

premiere, commemorating the 40th anniversary of the Declaration of Human Rights. This

accompanied by James at the Holy Family Church in September 1988. "Canticle for

"Peace" was submitted for a Pulitzer Prize nomination.

In today’s continued quest for world peace, this composition represents the creation of

the world, the turmoil and the steps we can take as humanity to achieve the ultimate goal