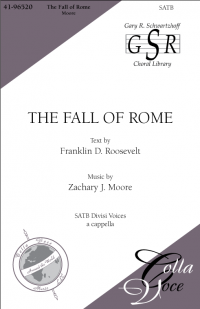 Fall of Rome, The

On June 5, 1944, President Franklin Delano Roosevelt, Thirty-Second President of the United States (1933-1945), addressed the nation regarding the Allied Forces taking back the city of Rome, the first of the three capitals held by the Axis countries. The text for The Fall of Rome is based on prayer that FDR delivered to the nation by radio on D-Day, June 6, 1944, as the invasion of the Allied troops was underway in France.

In his radio address, FDR stated, “My fellow Americans, last night, when I spoke to you about the Fall of Rome, I knew at that moment that troops of the United States and our allies were crossing the English Channel in another and greater operation. It has come to pass with success thus far. And so in this poignant, hour, I ask you to join with me in prayer:”